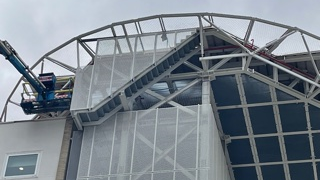 The Vall d'Hebron Hospital has launched its new Medical Emergency Heliport (SEM) located on the roof of the Traumatology Hospital, within the general hospital complex.

The construction consisted of the creation of an octagonal aluminum platform, mounted on a steel structure on the roof of the west wing of the existing building, with the capacity to support the weight of the landing strip of the medicalized helicopters that until now had landed at the other side of the Ronda.

In this way, the patient is evacuated from the landing strip, on the roof of the building, to elevators that connect directly with the Traumatology Emergency Department or taken from there to another area of ​​the hospital compound, thus reducing vital response time for patients. very serious.

The project, promoted by the Catalan Health Institute (with Infrastructure Management from the Generalitat de Catalunya), belongs to Casa Solo Arquitectes and the AT3 office has participated as Execution Directors of the works.